After a historically rough start to the year, stocks finally rallied enough to put the S&P 500 and Dow in the green for the year. Extended weakness in the dollar-which investors hope could boost economic growth and corporate profits-contributed to the gains.[1] For the week, the S&P 500 rose 1.35%, the Dow added 2.26%, and the NASDAQ grew 0.99%.[2]

The last two weeks have been important in terms of global monetary policy. The European Central Bank, Bank of Japan, and Federal Reserve all met to determine next steps for their respective economic spheres of influence. Currently, there is a divide between the Fed, which is moving away from low rates while supporting economy growth, and the ECB and BOJ, which are fighting slowing economic growth with negative rates and quantitative easing. However, the latest Fed meeting suggests that the divide may not be as great as it was before.

The Fed voted last week to hold rates steady, not being ready to commit to further increases at the moment. However, the central bank’s official statement indicated that we can expect two interest rate hikes this year, instead of the four projected in December. The statement makes it clear that the Fed is adjusting its expectations to a slow-growth, slow-inflation world, which brings it more in line with the concerns of other central banks.[3]

The Bank of Japan also voted to hold rates steady at the current negative 0.1% level last week; however, official notes from the January meeting showed that central bankers also debated expanding asset purchases to further stoke growth.[4] The move into negative interest rates by the ECB and BOJ-essentially charging depositors for the privilege of holding cash-is worrying to some. Some economists fear competition between central banks to lower rates (potentially triggering a currency devaluation war) as well as the effect of negative rates on bank profits.[5]

One big question on everyone’s mind is this: Does the Fed have enough bullets left to respond to an economic slowdown?

After seven years of ultra-low rates, the Fed can’t push rates much lower without going into negative territory. Though Fed chair Janet Yellen has stated that negative rates aren’t off the table in the event of a slowdown, it’s clear that the Fed isn’t keen on the idea.[6]

Former chair of the Federal Reserve Ben Bernanke waded into the fray last week with a blog post supporting a “balanced monetary-fiscal response” to a potential downturn. In his ideal scenario, the best response to an economic slowdown would combine further quantitative easing and interest rate decreases with fiscal policies like increased government spending.[7]

Bernanke’s support for accommodative fiscal policy isn’t new; in the past, he has rebuked Congress for not doing enough (in his opinion) to stoke economic growth.[8] Leaving the politics of government spending firmly aside, here’s what we can take from Bernanke’s remarks: The Fed is taking threats of a slowdown seriously and may still have enough tools in the toolbox to fight a downturn if it comes.

Is a downturn likely? We can’t say. Predicting a recession is always difficult, and the probabilities of a recession this year are all over the place. A Wall Street Journal poll of economists has the current probability at 20%, down from 21% last month.[9] The Federal Reserve Bank of Atlanta sees the risk as much lower-just 10%.[10] Yet another prediction has the odds at just 4.06[11] Basically, no one knows for sure.

In the week ahead, investors will be watching currency prices to see if the dollar continues its downward trajectory. If investors believe the dollar has peaked in value, it could give markets enough confidence to extend the rally further.

“I don’t have any limitations on what I think I could do or be.” – Oprah Winfrey 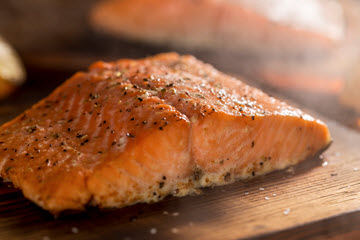 This fast recipe comes together quickly with a side of rice.

Chef’s Tip: Try this recipe with cod, tilapia, or another firm white fish. You can find bok choy at many grocery stores or Asian specialty groceries.

Directions:
Heat a large heavy-bottomed skillet over medium-high heat. Add the oil. Sprinkle both sides of the salmon fillets with salt and black pepper. Arrange them in the pan so that they aren’t crowded, and allow them to cook, undisturbed for 3-4 minutes per side to form a nice crust.
While the salmon is cooking, mix the bok choy, apple, and green onions with the yogurt, lemon juice, and a pinch of salt and pepper.
Serve the salmon with the slaw alongside.
Recipe adapted from RealSimple.com[16]

If you haven’t yet contributed to an Individual Retirement Account for 2015, there’s still time to act before the April filing deadline. Here are a few things you need to know:
To contribute, you must be earning taxable compensation from wages, salary, tips, bonuses, alimony, or self-employment income. You must be under age 70-1/2 to contribute to a Traditional IRA. There is no age limit to contribute to a Roth IRA.
When making your contribution, be sure to choose the correct tax year.
For most people, the most you can contribute to an IRA for 2015 is the smaller of your taxable compensation or $5,500. If you were age 50 or older by the end of 2015, you can increase your contribution to $6,500.
For more information about contributing to your IRA, contact a qualified financial or tax expert.

Stuck Between Clubs? Choke Down.

When you’re faced with a tricky shot between clubs, don’t reach for the shorter club. Instead, choose the longer and choke down an inch or two on the grip; think of it as adding a half-club without having to modify your swing. Set up and swing as you normally do and hold back on the impulse to swing softer.

Spring is here and pollen counts are heading up around the country. Seasonal allergy sufferers may be able to mitigate some of their symptoms by changing the way they eat during allergy season. As always, make sure you speak to your physician about any dietary changes that may affect medication. Here are some tips:

If you have a plugged sink or slow-draining shower, don’t reach for a harsh chemical cleaner that can damage the environment and leach chemicals into your indoor air. Instead, look for bacteria-based products that help keep pipes clear without the use of chemical solvents. Check your local hardware or home improvement store.

The SPUSCIG launched on April 09, 2013. All information for an index prior to its Launch Date is back-tested, based on the methodology that was in effect on the Launch Date. Back-tested performance, which is hypothetical and not actual performance, is subject to inherent limitations because it reflects application of an Index methodology and selection of index constituents in hindsight. No theoretical approach can take into account all of the factors in the markets in general and the impact of decisions that might have been made during the actual operation of an index. Actual returns may differ from, and be lower than, back-tested returns.

Featured Image Notes: All index returns exclude reinvested dividends, and the 5-year and 10-year returns are annualized. Sources: Yahoo! Finance, S&P Dow Jones Indices, and Treasury.gov. International performance is represented by the MSCI EAFE Index. Corporate bond performance is represented by the SPUSCIG. Past performance is no guarantee of future results. Indices are unmanaged and cannot be invested into directly.
These are the views of Platinum Advisor Marketing Strategies, LLC, and not necessarily those of the named representative, Broker dealer or Investment Advisor, and should not be construed as investment advice. Neither the named representative nor the named Broker dealer or Investment Advisor gives tax or legal advice. All information is believed to be from reliable sources; however, we make no representation as to its completeness or accuracy. Please consult your financial advisor for further information.