After a rocky start to the year, most stocks ended the first quarter slightly higher, which is remarkable considering the negative sentiment that caused stocks to selloff in the early weeks of 2016. For the quarter, the S&P 500 gained 0.77%, the Dow grew 1.49%, and the NASDAQ fell 2.75%.[1]

Markets faced serious headwinds last quarter due to slowing economic growth around the world. Combined with rising interest rates, a strong dollar, and falling commodities prices, we faced a perfect storm of factors that ticked off a stock market correction. However, after falling by as much as 10.5% earlier in the quarter, the S&P 500 gained 6.8% in March. That’s the best performance since October 2015.[2] Given the roller coaster ride we’ve had this year, the recent gains are a testament to the resilience of investors.

Slowing global economic growth. Concerns about overseas growth were responsible for a lot of market activity. China’s ongoing economic woes caused major turmoil in markets around the world as investors digested the news that the world’s second-largest economy is slowing.[3]

Though China is grappling with a transition away from a manufacturing-centered economy, experts fear that the move won’t come without pain.[4] Europe also faced its share of concerns. China’s slowing demand for foreign goods will hit European firms harder as many worry about terrorism and the migration crisis currently facing the borderless Schengen region.

Volatile oil prices. Oil producers faced falling demand and stubbornly high oil supplies, which caused oil prices to plunge.[5] At the end of the quarter, prices appear to have stabilized somewhat as oil-rich nations like Kuwait and Saudi Arabia seek to stabilize prices through cooperation between producers.[6]

The volatility and prolonged lows will likely be felt in energy sector earnings for the first quarter; however, low prices were a boon to consumers. Though gasoline prices will likely rise as refineries switch to summer blends ahead of the peak summer driving season, the average cost per gallon hit a 12-year low in the first quarter. The national average for the quarter was $1.86 per gallon-saving Americans nearly $10 billion, or about $45 per licensed driver. Did Americans plow those gas savings back into the economy through spending? We’ll see when spending data for the quarter is released.[7]

Recession worries. At the beginning of the year, investors became increasingly concerned that global issues could come home to roost in the form of a recession. Though fears of a slowdown are serious, some domestic economic data suggests that a recession may not be nigh.[8] The labor market added 628,000 jobs in the first three months of the year. Other employment factors also improved; the labor force participation rate increased and the number of discouraged workers decreased.[9] Wages also increased 2.25% in March from a year earlier.[10] Consumer spending, which is a significant contributor to U.S. economic growth, also increased, albeit sluggishly.[11]

Central bank actions. Markets also responded to decisions by the Federal Reserve, European Central Bank, and Bank of Japan. While the Fed is working to bring interest rates closer to historic averages, the BOJ and ECB are struggling to stoke economic growth by lowering rates into negative territory and buying up assets.[12] The big questions remain: When will the Fed raise rates again? Do central banks have enough bullets left to fight a global slowdown?

After the first quarter’s wild ride, we can hope for a smoother second quarter. Current estimates peg U.S. economic growth at 0.7% in the first three months of 2016. That’s a big comedown from the 1.4% growth in the fourth quarter, but it’s in line with the slow start the economy has experienced in several of the past few years.[13] Is the economy still at risk of a slowdown? That’s very possible, and may depend on how much consumers open their wallets this year. 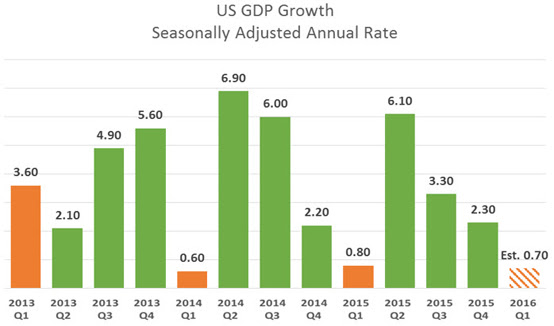 Gross domestic product (GDP) is the monetary value of all the finished goods and services produced within a country’s borders in a specific time period, though GDP is usually calculated on an annual basis. It includes all of private and public consumption, government outlays, investments, and exports less imports that occur within a defined territory.

What can we look forward to in the second quarter? Well, more uncertainty is certain. Though some fears have abated, most of the headwinds are still with us as we head into the second quarter. However, a lot of the potential pain facing the economy may already be priced into markets, and analysts are considerably more optimistic than they were during the rocky ride in January and February.[14]

If first-quarter results show a rosier picture, then investors could react with a resumption of the rally. A lot depends on what the Federal Reserve has in store for interest rates; currently, the odds favor a June hike.[15] Fed Chair Janet Yellen has struck a dovish tone in recent remarks, indicating that she plans to “proceed cautiously.” However, the rosy March jobs report could increase the odds of an April rate hike. We’ll know more in the coming weeks.[16]

“The manager does things right; the leader does the right thing.” – Warren Bennis 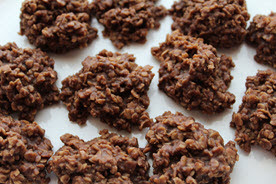 Directions:
Line two baking sheets with parchment or wax paper.
Heat a large, heavy-bottomed saucepan over medium-high heat. Melt the butter in the pot and add the brown sugar, cream, and cocoa powder. Allow the mixture to come to a boil.
Take the pot off the heat and add the peanut butter and vanilla, stirring until the mixture is smooth. Add the oats and peanuts and combine.
While the mixture is still warm, use two spoons to scoop and drop spoonfuls of the mixture onto the prepared baking sheets. Let them cool at room temperature until they are solid and no longer sticky. Store them at room temperature or in the fridge between sheets of wax paper until ready to eat.
Chef’s Tip: Allergic to peanuts? Try substituting cashews and cashew butter.

Like adults, children with investment income must file tax returns. Generally, parents or guardians are responsible for filing tax returns on behalf of minor children. Here are some special tax rules you should know before filing:
Interest, dividends, capital gains, or unearned income from a trust must all be reported.
If your child’s total investment income is more than $2,100, special “kiddie tax” rules kick in and any excess may be taxed at your income tax rate. These rules exist to prevent parents from sheltering income.
If your child’s income was less than $10,500 in 2015, you may be able to simply include the income on your own tax return instead of filing a separate return.
For more information, speak to your tax advisor or see IRS Publication 929, “Tax Rules for Children and Dependents.”

Recoil to Get Out of a Bunker

If you’re facing a buried shot with a bad lie, you might be used to hitting it steeply and taking a lot of sand with you. However, if you’re looking at a shot with a short pin or a downhill slope out of the bunker, you may need less topspin on the ball on the way out.

Instead of keeping the face closed or square, keep the face open. Set up with the ball in the middle of your stance and get ready to hit the ball steeply. However, instead of scooping under the ball and driving through it, you want to recoil at the moment of impact, sending your club back toward your shoulder. This recoil shot will send your ball up steep and soft, giving you more control on the green.

A new study found that complex three-dimensional video games may boost memory and cognition. These games stimulate the brain’s hippocampus region, which is associated with memory and learning. Study participants who played 3D games showed a 12% improvement in memory tests. Since the ability to use the hippocampus declines with age, scientists hope to find ways to use games to stave off memory loss and symptoms of dementia.

Asbestos in Your Home? Talk to a Professional

Many homes built before 1980 (or made with building materials produced before 1980) may contain asbestos in floor tiles, ceilings, roof shingles, siding, insulation, and between layers of sheetrock. As long as the asbestos remains contained within the construction material, it poses little hazard. However, if the material becomes damaged, it can release dangerous asbestos fibers into the air. If you suspect that your house contains asbestos and that you may need to remove it for a home remodeling project, it’s critical to contact an abatement professional who can test your home and offer advice.

The SPUSCIG launched on April 09, 2013. All information for an index prior to its Launch Date is back-tested, based on the methodology that was in effect on the Launch Date. Back-tested performance, which is hypothetical and not actual performance, is subject to inherent limitations because it reflects application of an Index methodology and selection of index constituents in hindsight. No theoretical approach can take into account all of the factors in the markets in general and the impact of decisions that might have been made during the actual operation of an index. Actual returns may differ from, and be lower than, back-tested returns.

These are the views of Platinum Advisor Marketing Strategies, LLC, and not necessarily those of the named representative, Broker dealer or Investment Advisor, and should not be construed as investment advice. Neither the named representative nor the named Broker dealer or Investment Advisor gives tax or legal advice. All information is believed to be from reliable sources; however, we make no representation as to its completeness or accuracy. Please consult your financial advisor for further information.