Now that 2015 is in the rear-view mirror, let’s take a look at some of the factors that influenced markets last year. Though markets closed essentially flat, it’s important to realize what a small miracle that is, given the many challenges that markets faced in 2015. For the year, the S&P 500 lost 0.73%, the Dow lost 2.23%, and the NASDAQ gained 5.73%.[1] 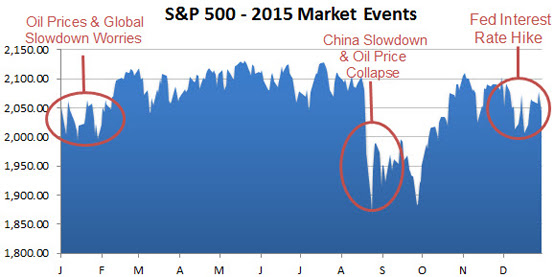 Let’s review some of the major events of last year:

The Federal Reserve Raised Interest Rates
After months of anticipation, the Fed finally pulled the trigger and raised interest rates in mid-December for the first time since 2006.[2] After years of near-zero rates to stimulate business spending and economic activity, the Fed is finally confident enough to raise rates to keep prices from rising too fast.

How will the Fed’s move affect bond yields? Short-term rates will likely start inching up, which we will hopefully see reflected in higher bond and CD rates, but long-term bonds are much harder to predict. Overall, bond yields should head higher if the Fed continues its stable, predictable process of raising rates.

Oil Plummeted to Historic Lows
2015 was another volatile year for oil prices and continued weakness highlighted concerns about global growth. At the end of December, Brent Crude closed at $37.08, down nearly 70% from a high of $115.19 in mid-June 2014.[3]Weak global demand and high supply volume battered oil prices, even as the total number of oil rigs fell.

Cheap oil is a mixed bag for the market. On the one hand, it’s a win for consumers who benefit from low gasoline prices and cheaper goods; on the other hand, oil-producing countries, energy companies, and ancillary industries have been hard hit by prolonged lows in oil prices. Weak demand for oil is also seen as another sign of the global economic slowdown.

Global Jitters Contributed to Volatility & Pullbacks
As the U.S. continued to improve economically in 2015, markets were dogged by the realization that much of the rest of the world isn’t faring so well. It has become very clear that Europe, China, and many emerging markets are struggling with protracted economic weakness.

Emerging market economies like Brazil, Turkey, and South Africa benefited from years of low interest rates, during which investors flooded their markets looking for higher returns. Now that the easy money party is ending, these investors are pulling their money out. Emerging market countries are dealing with the one-two punch of higher interest rates (increasing their borrowing) and debts that are denominated in a strengthening dollar, making it harder to pay back existing loans.[4]

These global worries came to a head in August when the Chinese central bank shocked the world by devaluing the yuan.[5] By making the Chinese currency cheaper against other currencies, central bankers hope to boost demand for Chinese goods. The move was widely viewed as an admission that the world’s second-largest economy is in trouble, and markets reacted by plummeting. Between August 10th and August 25th, the S&P 500 dropped over 11%, officially entering correction territory.[6]

However, markets didn’t stay there; investors quickly regained their optimism and bought the dip, sending the S&P 500 up nearly 9.5% by the end of the year.[7] The lesson? Corrections are normal, healthy parts of the market cycle. While the sky can seem like it’s falling at times, taking a deep breath and looking at underlying fundamentals is key to avoiding emotional reactions.

The U.S. Economy Continued to Improve
Though the global economy struggled in 2015, the U.S. economy continued to do well, even after a rocky start to 2015. Though economic growth slowed, hampered by global headwinds, the economy turned out respectable second- and third-quarter growth. Though we don’t have fourth-quarter data yet, economists project that the economy grew 2.2% in the final three months of the year.[8]

The labor market also continued to make progress last year. Overall, the economy is projected to have gained 2.5 million new jobs in 2015 and trimmed the unemployment rate to 5.0%. After 2014’s 3.1 million new jobs, we can say that 2015 ends the best two-year period for the labor market since the dot-com boom days of 1998-1999. Though wage growth still isn’t spectacular, hourly earnings increased 2.3% over the year.[9]

Comparing the jobs growth to the previous year’s total might suggest that the labor market growth slowed down in 2015. However, the rate of voluntary “quits” increased in 2015, indicating that people feel comfortable enough in their prospects to leave their jobs for greener pastures.[10] All told, the labor market did a lot to boost the economy last year.

Headwinds and Tailwinds in 2016

While we have been largely optimistic about markets in past years, we’re shifting to a more guarded stance for 2016. Many of the headwinds that dragged on market performance last year are still with us; while the “plow horse” U.S. economy is projected to grow moderately this year, global challenges remain.[11]

Overall, Wall Street is also cautious about stocks in 2016. A poll of top Wall Street analysts forecasted an average S&P 500 gain of 6.28% growth in 2016.[12] As always, it’s best to treat these predictions with caution as projections this early in the year are always nebulous. What we can do right now is take a look at fundamentals and think about how these factors might play out in market performance.

In the coming weeks, investors will be looking hard at fourth-quarter numbers to see how U.S. companies performed in the final months of the year. In the week ahead we’ll see the December jobs report and learn more about the Fed’s decision-making process around rates. We’ll also see whether higher interest rates affected demand for vehicle sales and other big-ticket items at the end of the year.[13]

As always, if you have any questions about markets or your personal situation, please give us a call. We are honored by the trust you place in us and look forward to serving you in 2016. 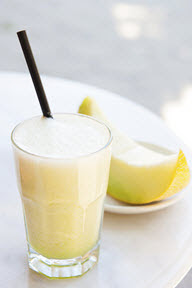 Chef’s tip: Try another version of this smoothie by substituting almond or soy milk for the fruit juice.

Directions:
Peel and slice the melon into 1-inch chunks and let them freeze overnight on a tray. You can omit this step for time and end up with a lighter, frothier smoothie.
Add the ingredients to the blender in two batches and puree on high. If you prefer your smoothies thicker, add less fruit juice. If you find the smoothie to be too thick, add more juice or water and continue blending.
Recipe adapted from Kay Chun | RealSimple.com[18]

Though Congress passed many new tax provisions in the final days of the year, the IRS still plans to start the 2015 tax season on schedule. Here are a few tips to help your tax preparation go more smoothly:
The filing deadline will be Monday, April 18, 2016 for most of the country. Taxpayers in Maine and Massachusetts will have until Tuesday, April 19 due to the celebration of Patriots Day.
Get your paperwork in order. Collect all receipts, statements, donation letters, and last year’s tax return and put them in a safe place.
Make a list of the tax documents you expect to receive, such as W-2s, 1099s, 1099Rs, 1098-Ts, etc. Check them off the list as you receive them.
Contact your tax preparer as soon as you have most or all of your documents in hand.
Don’t wait until the last minute!
Tip courtesy of IRS.gov[19]

Is your swing in balance? A balanced swing means that you finish with your face, chest, and belt buckle facing the target and most of your weight on your front foot. If your finish is out of whack, it’s likely that your swing is unbalanced and your shots are lacking in power.

To improve your balance, try swinging barefooted so that you can really feel the contact with the ground. Tee up with an iron and focus on making solid, well-balanced swings. The idea is to develop the body consciousness to know when you’re in balance and bring that motion with you when you play in shoes.

Healthy Lifestyle: Jump-Start Your Fitness in 2016

If you’ve resolved to incorporate more physical activity into your life in 2016, use these tips to get your fitness regime off to a good start:
Wake up and smell the coffee. Setting an automatic coffee pot to brew when your alarm goes off can help motivate you to get out of bed instead of hitting snooze. The caffeine can also give you an extra boost for your workout.
Schedule your exercise. Research shows that people who exercise at the same time and make their workouts a priority are much more likely to stick to their new habits.
Test drive your options. Now’s a great time to try out different gyms, spas, classes, and other fitness options. Try out a few different classes and group workouts for the camaraderie and structure.
Get the gear. If you haven’t upgraded your workout wear in a few years, motivate yourself with some new duds. Clothing can have a positive psychological effect on your willingness to keep training.
Tip courtesy of AARP[21]

Green Living: Traveling in 2016? Think About Your Carbon Footprint

If you’re going to be taking trips this year, use an online carbon calculator to determine how much C02 your travel will put into the atmosphere. If you’d like to make your travel greener, you can consider using different modes of transportation, staying in green lodgings, or offsetting your carbon use.

The Dow Jones Corporate Bond Index is a 96-bond index designed to represent the market performance, on a total-return basis, of investment-grade bonds issued by leading U.S. companies. Bonds are equally weighted by maturity cell, industry sector, and the overall index.

These are the views of Platinum Advisor Marketing Strategies, LLC, and not necessarily those of the named representative, Broker dealer or Investment Advisor, and should not be construed as investment advice. Neither the named representative nor the named Broker dealer or Investment Advisor gives tax or legal advice. All information is believed to be from reliable sources; however, we make no representation as to its completeness or accuracy. Please consult your financial advisor for further information.